How Private Are Private Algorithms?

The post is a \(\sim\)10 min read and only assumes knowledge about the definition of differential privacy.

We study the question in the title in the context of differential privacy, the most successful quantitative measure of privacy to date. But there are still many versions: \((\varepsilon,\delta)\), Renyi, concentrated and truncated concentrated… Which one should we use? Maybe it’s time to take a step back and see what is shared by these notions.

A good approach to providing rigorous security/privacy guarantee is by reasoning about the potential adversary:

Differential privacy (DP) can be thought of in these terms, with the following attack in mind: the adversary is given the (randomized) algorithm \(M\) and its output \(y\), and attempts to infer whether the input database is \(D\) or \(D'\). This is often called “differential attack” because his goal is to differentiate two cases.

Next question: how would he achieve differential attack? 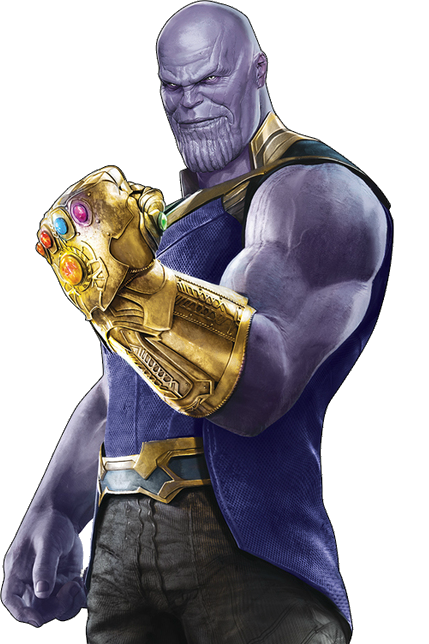 If you can convince yourself that this is the best thing for the adversary to do, congratulations! You have rediscovered the Neyman–Pearson lemma.

So the second question was answered 87 years ago by the founding fathers of statistics, but what we really care about is limiting the “differential power” of the adversary. In other words, we want him to make errors. The two types of errors (mistaking \(D\) as \(D'\), and \(D'\) as \(D\)) are often called type I and type II errors respectively. It’s often safe to ignore which is which in DP since \(D\) and \(D'\) are considered symmetric. When the threshold \(h\) in the above algorithm moves from \(-\infty\) to \(+\infty\), type I error decreases from 1 to 0 and type II error increases from 0 to 1. This yields a curve (see Figure 1) that encodes all possible behaviors of the most powerful adversary. “Differential power” would simply mean how close this curve is to the axes. Alternatively, if we consider it as a function that maps from \([0,1]\) to \([0,1]\), differential power refers to how small this function is. Because of its central importance, we will give it a name \(T_{M(D),M(D')}\) as it is determined by the distributions of the possible outcomes \(M(D)\) and \(M(D')\). 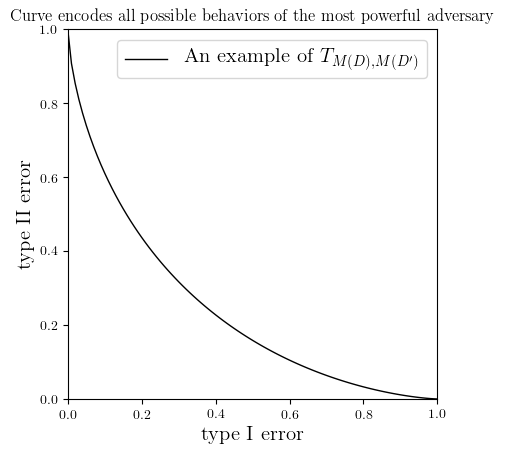 A bound on differential power means guaranteed error for the adversary. To provide worst case guarantees for all possible inputs, we should consider the strongest differential power against all neighboring databases, i.e. the pointwise infimum of \(T_{M(D),M(D')}\).

At this point you may say:

Wait… I don’t recognize this sh*t… Aren’t you going too far away from differential privacy?

where \(f_{\varepsilon,\delta}\) is defined as in the figure. 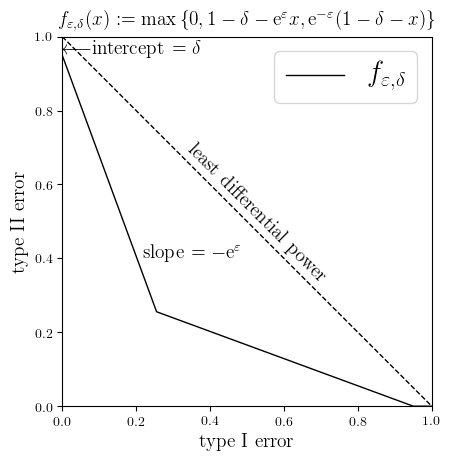 It is helpful to consider the most private mechanism \(M_0\) that ignores the input and always outputs a certain distribution. Among all mechanisms, the adversary has the least differential power working against this one — he can do no better than random guessing, which corresponds to the line type I error \(+\) type II error \(=1\). In other words, \(\mathrm{Diff}_{M_ {0}}(x) = 1-x\). Of course, the graph (dashed line) is above that of \(f_{\varepsilon,\delta}\).

One lesson that I learned from mathematicians is, when someone tells you an inequality (for example \(\mathrm{Diff}_M \geqslant f_{\varepsilon,\delta}\)) and you want to act like you care, ask the following

When does equality hold?

It happens to be the question in the title! That’s because, to see if equality holds, we need to know \(\mathrm{Diff}_M\) exactly, which is a precise description of how private the algorithm \(M\) is.

With the above thinking, we can start to answer the question in the title, for some “building block” private algorithms in particular. For each of them, is the true differential power \(\mathrm{Diff}_M\) equal to the design goal \(f_{\varepsilon,\delta}\)? If not, how different are they? 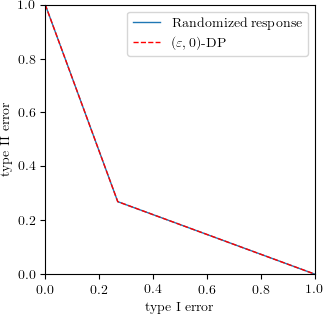 From the adversary’s perspective, he has to differentiate two shifted Laplace distributions. The easiest case occurs when \(q(D)\) and \(q(D')\) differ by 1. That is, the differential power against the Laplace mechanism is 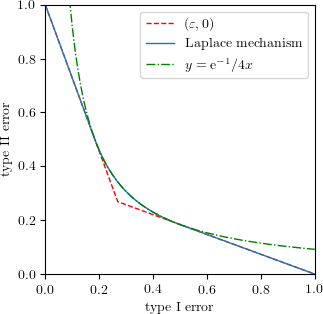 Gaussian Mechanism: Not Even Close! 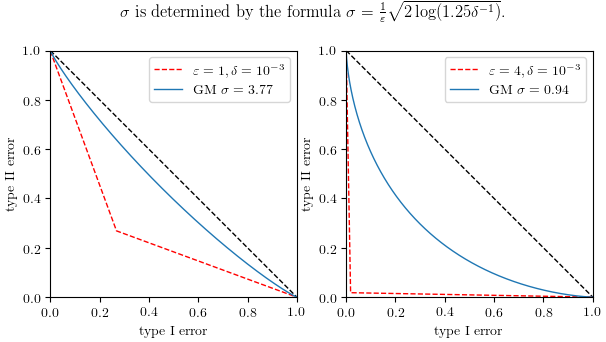 We proceed to examine

General principles of composition in DP include:

We will illustrate the two principles using randomized response as an example.

Suppose each individual holds \(n>1\) sensitive bits, say \(b_1b_2\cdots b_n\). Each can be randomized independently. The mechanism output \(M(b_1b_2\cdots b_n)\) is a product distribution. For example, assuming each bit is randomized with the same probability, then \(M(101) = \mathrm{Bern}(p)\times \mathrm{Bern}(1-p)\times \mathrm{Bern}(p)\). Obviously, the adversary has the most differential power when two individuals have exactly opposite bit vectors. With a bit more argument one can show that the pair \((00\cdots0, 11\cdots1)\) is as hard as other opposite bit vectors. That is, when \(M\) is a composition of randomized response, the differential power satisfies

Likelihood ratio test for Bernoulli products is also not hard. The resulting \(\mathrm{Diff}_M\) is a piecewise linear function as the left panel shows. On the right panel we compare two mechanisms: the blue solid line corresponds to the 25-fold composition of randomized response, each being \((\varepsilon,0)\)-DP with \(\varepsilon=0.2\), and the red dashed line corresponds to the Gaussian mechanism with \(\sigma=1\) for a query with sensitivity 1.

Clearly, something is going on here, but how general is it?

Applying the two principles, when \(M\) is a composition of Laplace mechanisms, we have

This time likelihood ratio test is a bit tricky to do, but with some numerical techniques we can still do it. In the following figure, the left panel shows \(\mathrm{Diff}_M\) for \(n=2,\varepsilon=1\), while the right panel shows \(n=25,\varepsilon=0.2\) and compares it again with the Gaussian mechanism with \(\sigma=1\) for a query with sensitivity 1. 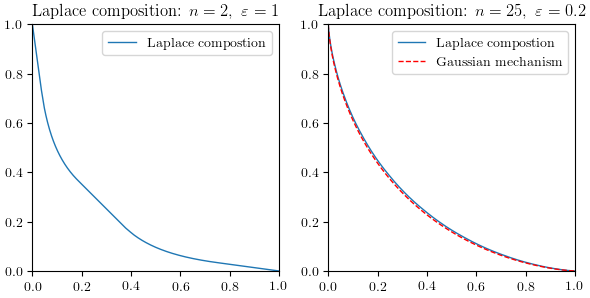 Similar to Laplace case above, we have \(\mathrm{Diff}_M = T_{N(0,\sigma^2)^{\otimes n}, N(1,\sigma^2)^{\otimes n}} = T_{N(0,\sigma^2 I_n), N(\mathbf{1},\sigma^2 I_n)}.\) In other words, composition of Gaussian mechanisms is reduced to testing two shifted spherical Gaussians. It is equivalent to testing shifted one-dimensional Gaussians, because a rotation can align the shifted direction to the \(x_1\)-axis, and the remaining components are not informative. So

Showing two identical curves is boring, but we still include the figure for completeness. 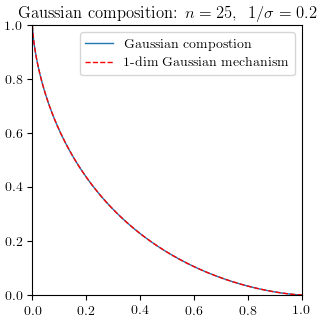 Observing these figures, we should be fairly confident that

This is the origin of our paper Gaussian Differential Privacy and the deep learning follow-up. The universal object here is a single parameter family of functions

GDP algorithms have a nice interpretation: Determining whether an individual’s data was used in a computation is harder than telling apart two shifted Gaussians. In addition to that, we have developed a complete toolkit for it, including theorems for group privacy, privacy amplification by subsampling and composition. More importantly, we also show the general CLT, which explains why all of the above compositions look like one-dimensional Gaussian mechanisms.

In addition to that, because 1. composition models iterative algorithms, and 2. SGD is iterative, we can apply our CLT to the most important algorithm in modern machine learning — its private version also looks like a Gaussian mechanism!

You probably already have your own ideas, but in case that I failed to keep your attention (after all, this is my very first blog post), here is a list for your convenience:

This post is based on a talk I gave at the PriML workshop at NeurIPS 2019. Video recording can be found here, starting at 55:00. A more technical talk can be found here at Simons Institute.